Back to the DOSBox-X Wiki Welcome page.

DOSBox-X is designed to be completed DOS emulator and provides official support for East Asian languages and systems, including (Simplified and Traditional) Chinese, Japanese, and Korean languages in different emulation modes. These languages use double-byte character set (DBCS) to render text instead of using standard ASCII characters. All of these languages are well-supported in DOS/V modes or the TrueType font (TTF) output with CJK code pages (932, 936, 949, and 950), with additional support for the Japanese language in PC-98 and AX (JEGA) modes. There are also translation files for almost all of these languages available for use with DOSBox-X so that the user interfaces will be displayed in these languages:

Native DOS/V services are supported by DOSBox-X, with options for Simplified and Traditional Chinese, Japanese, and Korean language modes. There is a [dosv] section in the config file, and you can enable different DOS/V modes with the dosv config option, i.e. chs (cn) for Simplified Chinese DOS/V, cht (tw) for Traditional Chinese DOS/V, jp for Japanese DOS/V, and ko for Korean DOS/V. DOSBox-X will try to get or use the fonts for these languages in the DOS/V mode, but you can also specify your own font files (in FONTX2 formats for Japanese, or HZK16 for Simplified Chinese, or STDFONT.15 for Traditional Chinese) via config options starting with fontx (such as fontxsbcs and fontxdbcs options) in the [dosv] section of the config file. For Simplified Chinese, the GB2312 charset is supported by default, but you can optionally enable the GBK extension with the gbk config option. Note that this mode is mainly designed to run DOS/V compatible programs or games, along with some normal DOS software. For a general DOS CJK environment it is recommended to use the TrueType font output with CJK support (described below) instead.

A screenshot of the Japanese DOS/V mode: 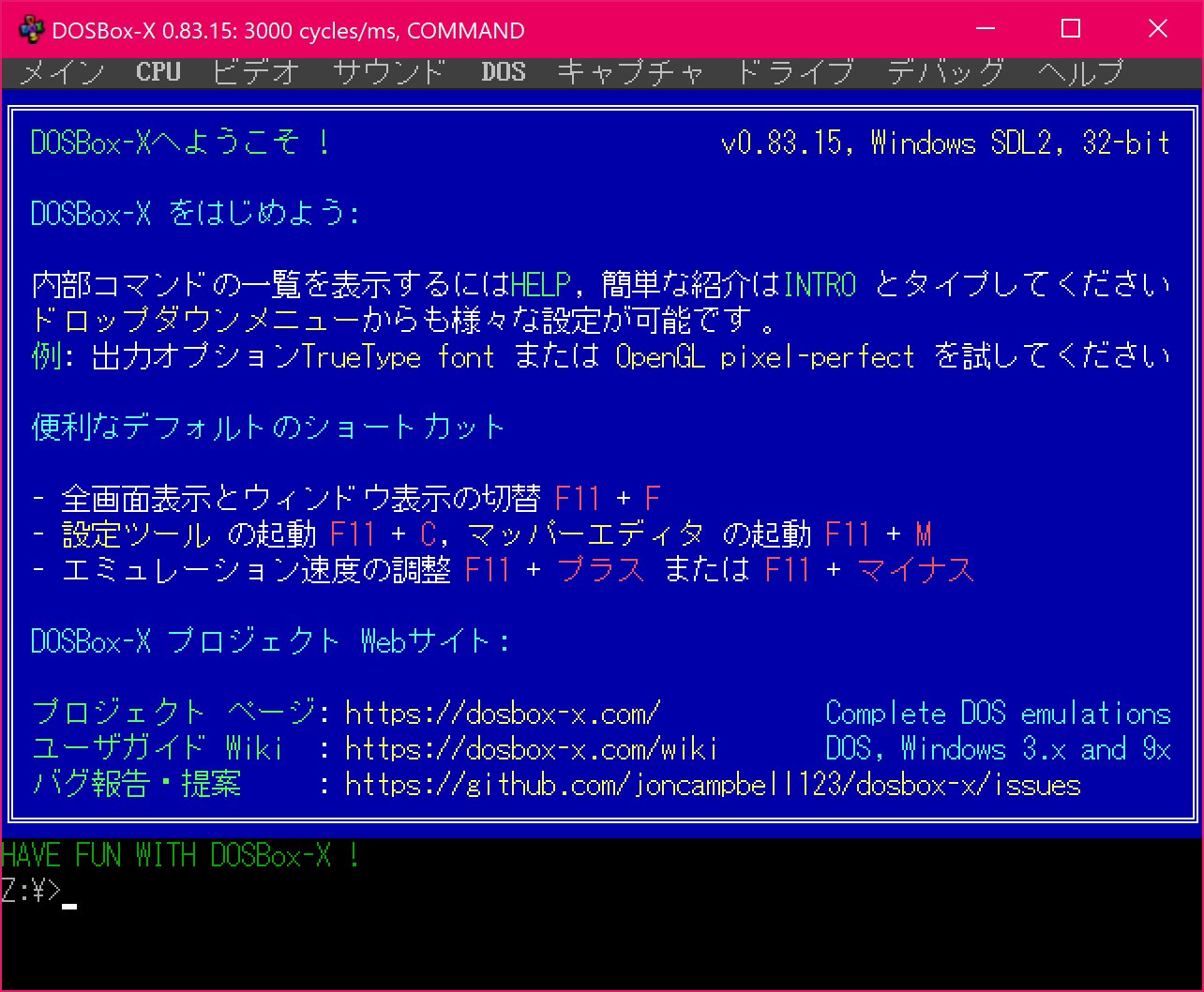 In addition, there is a fontxdbcs14 option which is useful for displaying CJK characters in the Configuration Tool and Mapper Editor (if you use a language file). It is similar to the fontdbcs option, but it accepts 14-pixel DBCS fonts rather than 16-pixel ones. Use HZK14 for Simplified Chinese, and STDFONT.15 for Traditional Chinese.

In addition to DOS/V modes, you can enable CJK support using the TrueType font (TTF) output with a CJK code page (932 for Japanese, 936 for Simplified Chinese, 949 for Korean, and 950 for Traditional Chinese). General information about DOSBox-X’s TrueType font output is available from the TrueType font output guide page. Set the code page with either the country option in [config] section of the config file, or using CHCP command, such as country=81,932 or CHCP 932 for Japanese. The default TTF font bundled with DOSBox-X does not support Chinese/Japanese/Korean characters, but there are many TTF fonts available containing support for CJK characters, and you can load them for the TTF output via the font config option in [ttf] section of the config file. Some of these fonts (such as GNU Unifont and Sarasa Gothic) are intended to cover all CJK languages, whereas other TTF fonts (e.g. MigMix or M+ fonts) are intended to cover only characters of a specific CJK language. TTF fonts like simkai.ttf and simhei.ttf are included in some versions of Windows, so you need to only specify a setting like font=simkai to load them in such cases. Otherwise you will need to download TTF fonts and load them accordingly. The SarasaGothicFixed.ttf and UnifontFullMediumMono.ttf font files are also available in the DOSBox-X repository for download:

As of DOSBox-X version 0.83.16, the SarasaGothicFixed.ttf font file is also included in the Windows installer, and DOSBox-X will try to automatically load it if you start DOSBox-X with a CJK code page and no other TTF font is specified.

A screenshot of the TrueType font output with the Simplified Chinese code page (936) using the SarasaGothicFixed.ttf font file: 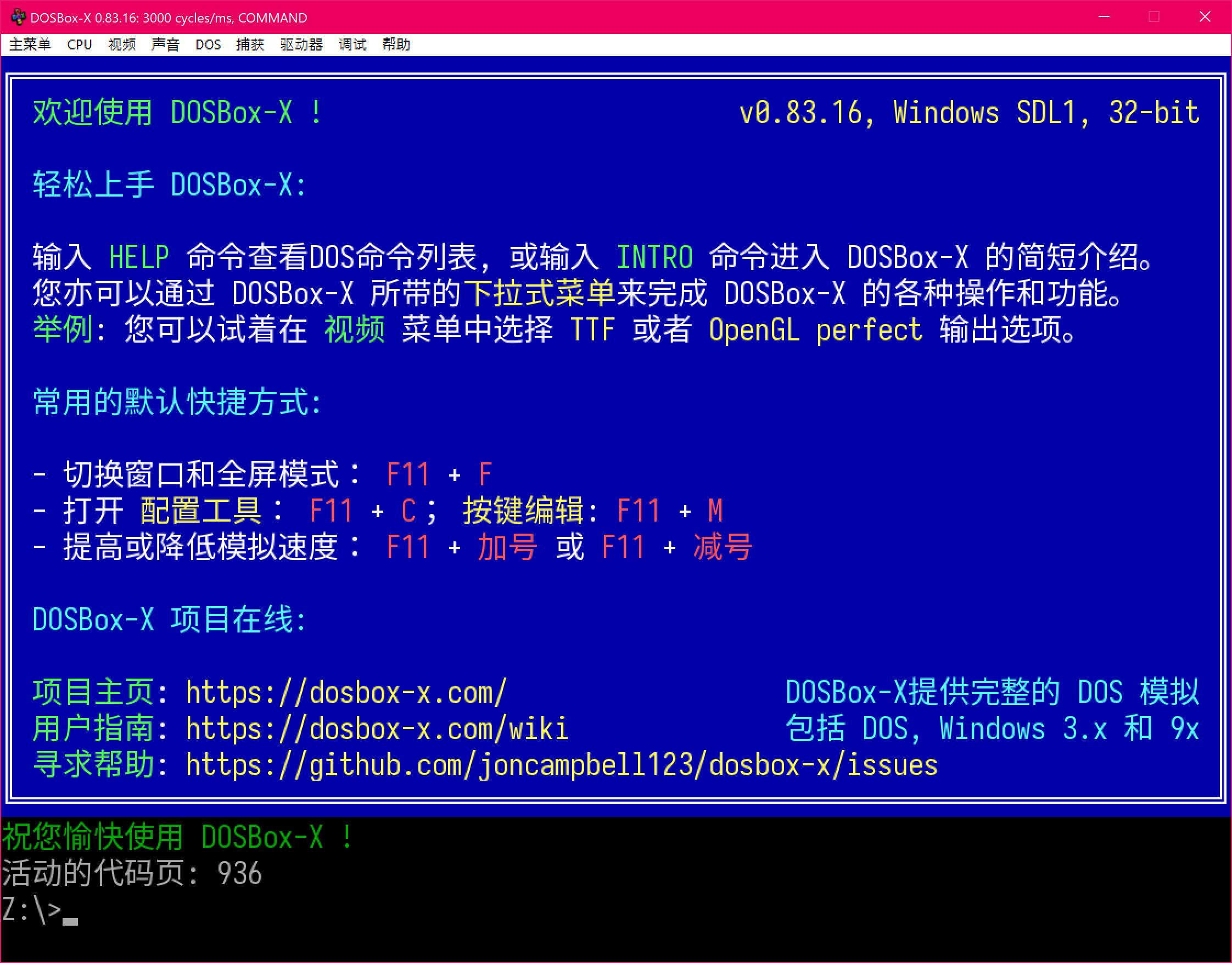 There are some TTF config options related to CJK support, such as automatic box-drawing recognition and SBCS <⇒ DBCS mode switch, as found in the [ttf] section of the config file. These can also be toggled dynamically from the drop-down menu (inside "Video" ⇒ "TTF options" menu group).

DOSBox-X provides emulation for the Japanese NEC PC-98 mode, so that you can play PC-98 games or run PC-98 programs in it, such as the early Touhou games. The PC-98 mode can be started with the setting machine=pc98, and it may also work in combination with the TrueType font output. See the PC‐98 emulation guide page for detailed information about PC-98 emulation in DOSBox-X.

DOSBox-X also provides emulation for the Japanese AX (JEGA) mode, a Japanese computing initiative starting in around 1986 to allow PCs to handle double-byte (DBCS) Japanese text via special hardware chips. The AX (JEGA) mode can be started with the setting machine=jega, and may also work in combination with the TrueType font output. In this mode you can press the right Ctrl key to toggle between romaji and kana input modes. Several config options related to DOS/V (see [dosv] section) can also be used for the JEGA mode.

Some external links with useful information: